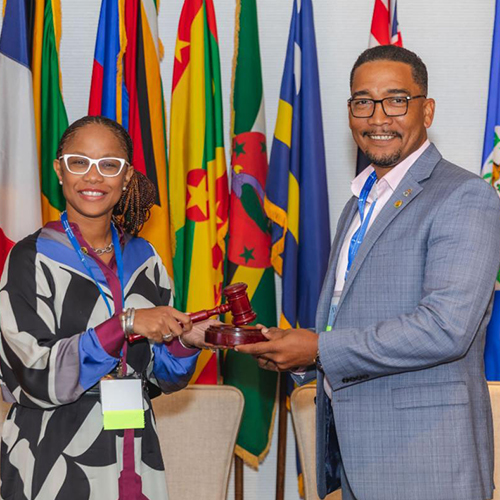 The Caribbean Tourism Organization (CTO) has a new chairman.

Cayman Islands Minister for Tourism and Transport Kenneth Bryan was elected as the new chairman of the inter-governmental body this week at the organization’s Annual General Meeting in the Cayman Islands.

Minister Bryan, a former television journalist and youth organizer, assumes the chairmanship of the CTO Council of Ministers for the next two years and succeeds outgoing chairman, Senator Lisa Cummins, Barbados’ Minister of Tourism and International Transport.

“I’m honored and excited to take over the mantle of the CTO chairmanship because I recognize, like all other members, that there needs to be some reform and restructuring, particularly with respect to air travel and marketing,” Bryan said.

“So I’m ready to take on the challenge, in collaboration with my regional colleagues, of finding a new way forward, as well as addressing any issues we have within the organization to improve efficiency and focus,” he added.

Bryan praised Minister Cummins for overseeing the CTO’s chairmanship during the “difficult period” of the COVID-19 pandemic: “Thank you to former chairman Lisa Cummins for the hard work that she did over a very difficult period, particularly in managing a very important organization when the whole region was dealing with difficulties in tourism, brought on by the pandemic.”

Rosa Harris, the Cayman Islands’ experienced and accomplished Director of Tourism, will serve as chairman of the CTO Board of Directors for the next two years.

Harris described the Cayman Islands’ role as a serious responsibility especially with the need to raise the visibility of the region as it recovers from the impact of the pandemic.

Cooperation, sharing information and networking will be key, she explained: “Being able to reach out, listen, learn, understand the uniqueness of the Caribbean nations … that’s a strength that we bring as the Cayman Islands being the chair of the CTO. We are going to ensure that we represent, and every voice in our membership will be heard.”